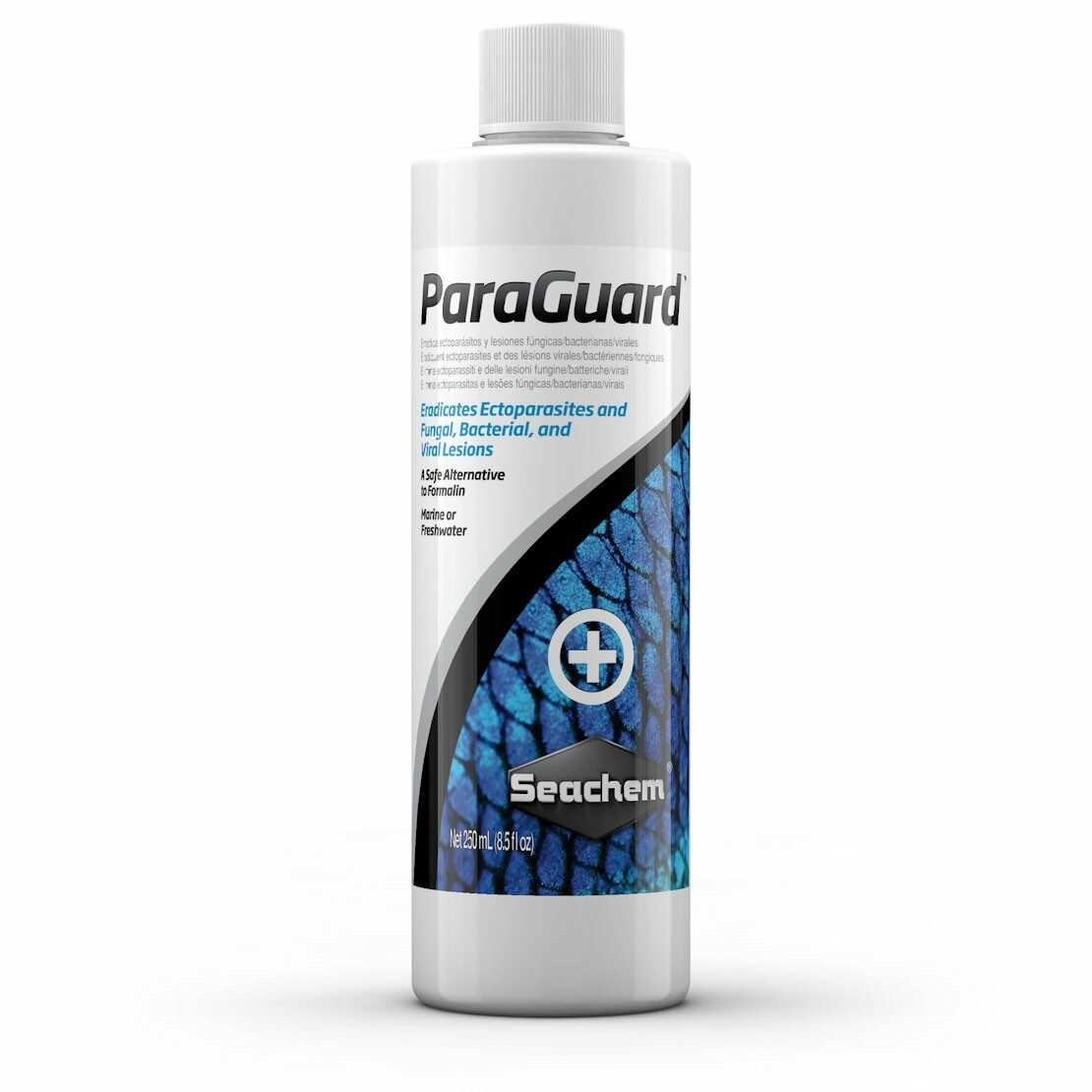 ParaGuard™ is the only fish and filter safe aldehyde based (10% by weight) parasite control product available (for parasites on fish). Unlike highly toxic and difficult to use formalin based medications, ParaGuard™ contains no formaldehyde or methanol and will not alter pH. ParaGuard™ employs a proprietary, synergistic blend of aldehydes, malachite green, and fish protective polymers that effectively and efficiently eradicates many ectoparasites (e.g. ich, etc.) and external fungal/bacterial/viral lesions (e.g., fin rot). It is particularly useful in hospital and receiving tanks for new fish and whenever new fish are introduced to a community tank.

ParaGuard™ is appropriate for treating a variety of parasitic infections of exotic fish. Below are some of the more common infections treatable with ParaGuard™. Be aware that many diseases and infections share similar physical and behavioral symptoms, e.g. clamped fins, lesions, loss of appetite.

Ichthyophthirius (freshwater) / Cryptocaryon (saltwater)
Looks like salt sprinkled on the fish’s body and fins. Usually accompanied by twitching, flashing, and other signs of stress and irritation. Several parasites are grouped under this name, but the symptoms are almost identical. Ich is among the most common infections of fish, and is entirely treatable with diligence and attention to water quality.


Suggested Treatment Period:
14 days in freshwater, up to 28 days in saltwater


Special Considerations
It is very important with this parasite to continue dosing for the full treatment period. A break in the medication allows the parasite to multiply and reinfect the fish.


Piscinoodinium (freshwater) / Amyloodinium (saltwater)
Similar to Ich, but smaller and grey-gold. Most often seen in saltwater, but can occur in freshwater as well. Velvet is less common than Ich, but the treatment is almost identical. We see it more often in saltwater than freshwater.


Special Considerations
Velvet is a photosynthetic parasite - it will help with treatment if you can turn off the lights while the fish are infected.


Bacterial infection
Fins appear shredded, frayed, or decaying. Fin Rot is frequently mistaken for damage from fin-nipping fish. Contrary to the name, this is actually caused by bacteria, not fungus.


Special Considerations
Fin Rot is often found as a secondary infection (that’s an infection that started because the fish was already sick). Make sure to check for additional infections.


Dactylogyrus trematodes (skin) / Monogenenean trematodes (gills)
Fish appear sluggish, flash against rocks, and often gasp and show other signs of stress. Flukes are difficult to diagnose because the parasite itself cannot be seen until the advanced stages of infection. Look for gasping, irritated or red gills, excessive mucus production, twitching and flashing, and translucent spots (advanced infections)


Special Considerations
Dip treatments with ParaGuard™ are helpful in treating and preventing flukes, but keep in mind that this parasite spends part of its life cycle living in your water and substrate - the entire tank needs to be treated in order to clear the infection.
Save this product for later
Display prices in: ZAR